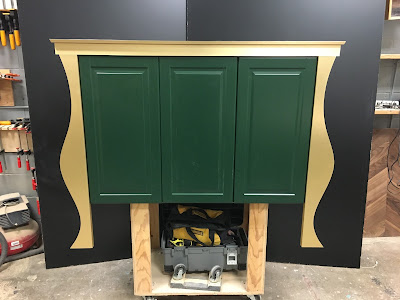 Sometimes in this line of work - Design - you have to exhibit 'professional spontaneity'. Sometimes you have to be able to go with your gut feeling that tells you that 'THIS IS IT' - if you miss this, it will never happen again.

I occasionally stumble upon people and things that really captivate me - there is a range of certain attractive qualities. Of people I take note, and usually check out their websites, follow their social media, attend their shows, etc. Materials I buy - I think it is a sign of experience if you are able to see  just the material and given it's qualities and presentation give it a form and a function - because that is precisely what furniture design is.

I remember the first time I was captured by ABET Laminatti products - they specialize in surfaces. Italian and still made in Italy, their products have been used by greatest names in furniture design and are emblematic of certain movements - if you see it, you know it. So it was with particular delight that I received a call from Hernan, who recently told me - 'Karol, I've moved up in the company, just so you know,' because I always call in and ask for him directly, anyways, he is always on the look-out for something special and out of the ordinary. He calls me up and says that I got to come down and see it for myself and excited I went.

What I saw just blew my socks away! - A rare, famous last pressings! This stuff doesn't exist anywhere except on recently auctioned off POSTMODERN pieces by the likes of Sottsass and the rest of the Memphis gang. I grabbed everything that Hernan had - in my opinion, from a design standpoint, as a furniture maker - these sheets were priceless. It was the last chance to do anything with them - be creative, make with with them, maybe re-interpret something! Absolutely limitless.

Those green IKEA BODBYN doors triggered it all - it just went so well with the gold. It is kinda of an interesting HIGH-low combination - Ikea SEKTION boxes are the cheapest as boxes go - still great quality! The sides and top are as extravagant as you can get - a combination of hard to do curves [labour- $$$] with precious, hard-to-work with materials. The design feels so rich, but the functional core of it is so common and accessible.

I named this piece 'Queen Meghan' - yes, after that Meghan. Apparently, the wife of prince Harry experiences quite a bit of bullying from the British public because: a] she's a divorcee, b] she is an American c] she is a woman of colour. I also read an opinion that '6 immediate members of the Royal Family have to die for her to become the Queen,' and that was the only reason why Harry was allowed to marry her. You know what I say, as a Canadian and still under the rule of monarchy?' GOOD! I cannot wait for her to become the queen - there I said it.