Ikea Hacker says - The FUTURE of furniture and labour, and where to PURCHASE. 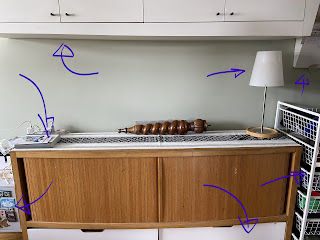 [picture shows a furniture and accessory filled wall from the writer's own place; blue arrows point to any piece that was either purchased from IKEA directly OR is an IKEA Hack]
Chapter 1 - Times they are a changin'...
---> There is more money to be made in instability and restricting the market;
There are many reasons for the current 'furniture situation' happening globally and in Canada. Investors are currently being advised to seek out corporations that can exhibit monopolistic tendencies in their pricing - inflation will only go up.
*edit: This has now been confirmed with the Tiffany Macklem of BOC ~not~ raising rates.
---> Politics, and Identity Politics are influencing the market in negative way;
I believe it was Jeff Bezos, the man with the biggest carbon footprint, that said 'Diversity decreases group cohesion', and this was driven home by Steve Jobs who crafted the ultimate concept of perceived consumer individuality with the creation of the iGadget.
When I was in gr.10, a recent immigrant to Canada, NAFTA was just about to pass and we ignorant children were tasked with arguing PROs and CONs of this Trade Deal. Class was divided into 6 equal parts, and I randomly landed in the MEXICO Pro camp. After half hour of group work, I was pushed out to the front to read that 'Mexican workers would benefit from businesses moving to Mexico seeking lower costs of production AND we would also need more truckers to haul more goods across the continent.' Personally I knew two friends whose dads lost manufacturing jobs after the jobs relocated south, to Mexico.
So it was with great disbelief I found out that it was on behalf of a Canadian commercial furniture tycoon, with enough of influence to get close to somebody in the government trade department that this mess is a partial result of. We truly are a banana republic when oligopolies have such huge influence over how much money is left in our pockets at the end of the day, and how much of your free time you will have to commit to the 'grind and toil of work' - I am thinking telecoms especially, but such collusive behaviour is exhibited everywhere in Canada, like 'baking bread' for example.
Who is this man that has caused this mess...? Well, what he thought was a strategic move to increase his profits, when he shifted his production out of Canada - net loss for us; I mean we have the people, the lumber, the infrastructure, the experience ---> we have everything! - and into Mexico, precisely for the reason the naïve me recited back in high school, turned out to be NOT SO. 'Greed is an universally shared feeling' and his customers soon found cheaper source of upholstered commercial goods in Asia. Especially China and Vietnam - those countries are famous for environmental, labour, and intellectual property 'discounts' - and in commercial it's all about the pricing. So however these things are done and arranged for, Canada obeyed and slapped a 100% tariff on upholstery from China, and a whopping 300% on upholstery imports from Vietnam. Bummer! No more cheap custom couches from CHINA!
---> Businesses first and foremost seeks stability of investment
Both economic and political - 'ideologies' and 'tribalism' are coming back - those behaviours increase social cohesion but make it more challenging for marketing environment.
Example: China is proving to be 'too hot' - see my tweets labeled 'Sexy time in China'; link to my twitter - for a lot of investors. IKEA shifted their important 'furniture stuff' production out of China and 'into a stable western democracy'.
For example: KOMPLEMENT, which is the foundation of IKEA's closet system is now made in Austria with hardware sourced in Germany; I already tested it and it is a GREAT improvement!; read about how to understand IKEA's quality here; KOMPLEMENT is part of my plan for 'NHA Design':


NHA is an acronym for Necessary Human Activity; NHAs differ by socio- economic and cultural classes; and rich people have absolutely different and diverging NHAs than the rest of us; improvements in NHAs yield greatest benefit ---> mental health goes up with improved organization; improved work productivity at 0 [ZERO] cost; easiest to execute, breaking down cultural barriers, redefining luxury, inconspicuous consumption, ideas just flow!
---> Vaccines and access to that technology is being weaponized.
I can't believe I am writing this, but inequitable global access to vaccines means that new variants of concern will keep on emerging, causing our Western healthcare system, education system and economy to become unstable. It means that the output of factories that produce goods for our economy will continue to fluctuate AND our own production will become unpredictable.
Home offices are the way of the future, and where will you source for an office that minimizes your NHA [Necessary Human Activity, aka WORK]? That's right, the place that thinks about everything when it comes to Quality of Design - IKEA! Are you better than Tom Dixon...?
---> Shortages of skilled labour.
There is a constant loss of skillset among the trades population due to less and less cumulative overall experience, less training and apprenticeship offers.
Residential quality construction is at an all time low - with the dominant market behaviour driving forces of 'Task-Rabbit-azation of Labour'. Simplifying and stripping skills and ingenuity from the most 'design vulnerable'  - if you have never done it or have never anyone seen do it then how do you know that it is done in any other way? What are the reasons for this presentation to the masses? 'Hippys use side door'...?
We are paying a ridiculous premium for largely excluding women from trades - the CULTURE needs to CHANGE!
- oh yes, it is costing our economy a pretty penny. Until women feel safe and secure, without any fear of being sexualized or worst yet, sexually assaulted on site we will be experiencing a deficit in numbers of skilled trades available for work.
And if you are thinking, 'Nah... the times are moving forward....', you are absolutely wrong. Top MEN responsible for the 'image of the industry' casually 'discussing sexual assault on a woman' on a podcast that makes it post-production and is listened to by 100k of other men in trades. It is scary. The story is unbelievable, hard to listen to, and the experienced tradeswoman that first brought this up - RIGHTFULLY SO - was first slapped with a 10 MILLION dollar lawsuit by the 'hurt men' and then was hounded off Instagram and other Social Media platforms. It is scary.
Let me make this clear, this behaviour is UNNACCAPTABLE!
---> Full blown Housing Crisis
'Flip-Homes' are a nightmare - lowest cost bids lead to poor labour. Examples include:
There is a wave of homes coming onto the market that are a DIRECT result of the 'sold as-is' - FLIPPED at lowest cost which increases the profits but drives quality down. We simply don't have enough trades to do the jobs in a knowledgeable and experience fashion.
As long as the skillset and experience required for a successful, lasting install, never mind any creativity, is restricted by lack of trades, trades culture and lack of  education the price will always be premium.
Another Example: there is small builder / renovator that is HOTT right now in my area. His deal is that he closes the projects more or less on time and within budget. He's got a rotating crew that does his work and is highly skilled. Imagination tho... that's something else, and if the client doesn't know how to articulate their needs or just basically assert how they want things done... well... 'you did not have that in writing'. Oh how annoying that is. I PROMISE you that the most annoying thing in the world is renovating your place and not getting it RIGHT because the contractor did not feel it was warranted to ask you about it and then he tells you 'you did not have that in writing'. Realities.
A mindful contractor will always pause work at the moment when a decision to install - put down a piece of wood, lay a tile, hang up a cabinet will ripple down into the project; not every piece, just once or twice. It's not just about installing, it's about bringing out the best, somebody's got to do it.
Buy your FURNITURE on the Street!

TO be continued.
Posted by Karol Kosnik