Confessions of an IKEA Hacker - 2017 Year in Review

First of all - Follow me on INSTA - get an inside scoop of how I hack things. Get some PRO tips on how to make it look like a million buck$! 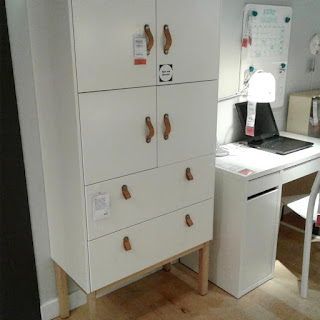 I caught myself completely OFF GUARD staring at this piece. I know my IKEA line-up like the back of my hand, and yet I wasn't able to pinpoint it! HA! This is SEKTION - their kitchens box! Veddinge doors + side panels with 'furniture legs' thrown on it, completed with leather straps straight out of Superfront's playbook! HA! it looked GREAT! I mean this is IKEA..... hacking.... itself.  This is what I would call 'true 2 the spirit' of IKEA hacking. And I also think 2017 marks the end of an era when IKEA with its 'stiff lip and high hat' took itself so seriously and decided to 'screw it!' - LETS SEE WHAT WE CAN DO!


A lot of things happened in 2017. For me, I basked in my famoosness [spelling intentional] that my media exposure brought as a result of the show that I organized [there was even some international exposure + an offer of a TV gig**!] - it was first ever IKEA Hackers Symposium. I put some 'academic spin' on it - and I think it makes sense - I think it can be studied, it has 'periods' and influencers, you know -you could write a proper thesis on it, you could put  a nice 'social aspect'  spin on it.

The excitement though is even better, because Ikea Hacking is experiencing large growth in terms of real, tangible market - yea, sure it's got a 'modern arts + crafts' feel to it and is much loved by crafters and makers - but I am aware of large trend of using IKEA kitchens OR cabinetry to renovate. And renovation business is booming in Toronto. You can't turn a corner without some structure being erected - modernism is in, some of it done well, and some not so. And those renos or builds are expensive! It would be pertinent for those suffering from anxiety to seek professional help during those times - designers and architects - but also a medical professional - you will need something strong. DELAYS are inevitable [this is why IKEA HACKING makes sense - ZERO lead times - you purchase boxes right there and then!]

[aside]
I am in the process of writing a piece called 'on the advantage of SEKTION for life', where I outline all the benefits of that box [of course paired up with my install system - which is super easy-peasy! - come to Practical Friday show, Jan 19, 2018 and do the hands on DEMO! skew the floor and level the base - 4 REAL!] - one of which is ZERO lead time to purchase cabintery - very flexible designs.
[back]

I defined IKEA Hacking in terms of three things: Accessibility, Affordability, Community. I did that based on my extensive experience as a hacker - there are numerous ways to access IKEA products in-person and on-line; smart manufacturing is key to keeping prices low - over 40 tonnes of Billy bookcases get made in Sweden everyday; people very much send in other hacks as 'inspirational images', ha! I even gotten my own work as inspiration! I overthink the concept of Ikea hacking - I see it very multi dimensional, including how it reflects on society, and what it spells out about the future, and what we can learn from IKEA as society.

But back to hacking - well, I don't know, maybe in 2017 IKEA got jealous and decided that it wants to get hacked on its own terms - IKEA's attempt to regain narrative. Gone are the days when Ikea brought legal ruin onto those who opposed it - and really, they had no grounds, like zero [0] - why would you take on your own biggest fans? But back then, that was a rigid, corporate, legal mindset - things have changed, as IKEA abandoned the hard-line approach, and instead is attempting to use soft power [hahaha! I read that Great Britain is one of those countries that exercises soft power well - opposite of say USA under Trump] to influence what 'hacking its products' means. For far too long others have had the 'ikea hacking' ball in their court, bouncing it around freely, 'doing things' with it, profiting from an unintended result of IKEA's business model [this was meant to lower the costs for consumer NOT to spur a modern 'arts+crafts' revival]

And they got none other than the biggest name is design -* TOM DIXON *- going on it, who then brought on his pupils into it. It's charming and human to read that story - reminds me fondly of my own design school days, not nearly as prestigious as -*TOM DIXON *- but nevertheless some smarts came out of that era. If there is one way to attempt to wrestle the 'leading torch' back into its own hands, this would be such a corporate move. Who would dare question Tom Dixon's move? Right? Kind of.... I think. I think it would be better if Tom Dixon took an existing IKEA product and did something with it. I am not passing judgment on this yet, as I am waiting on that *-Tom Dixon-* item to be accessible by me - the commoner down here. So just waiting for now...

The Ypperlig collection - much tauted [via the universal IKEA catalogue!] partnership between HAY - small boutique design firm; from Copenhagen, Denmark; but be mindful that this is European Union so 'creatives', whose work is not tangible in nature can work anywhere or be based from anywhere - and IKEA - most influential furniture retailer in the world is disappointing. In my Insta post I called it - 'industrial primitive' - especially when outsourced globally - some industrial processes are so common that they become 'primitive' - the tolerances are reduced, resolutions dropped, standards lowered - however all augmented by automation.

Furniture is something that we interact with on a personal level, we are all aware of all the details - consciously or subconsciously. And in my opinion, large number of pieces lacked that refinement and detail. Yes, automation allows for quick manufacturing but your hand will not be fooled when you run your hands down the table leg or handle those 'craft/skilled' made/painted jugs.

I am certain that the IKEA offer was very rigid - remember! you start with the price tag first - and that HAY did their best in resolving that challenge - still. BUT such 'undertakings', I think, do nothing really to advance 'the cause of furniture'. It almost felt like IKEA took on HAY - 'an everyday - accessible - design commoner' in an attempt to OFFSET the elitist move of getting -*TOM DIXON*- [try hiring -*TOM DIXON*- yourself  - $$$$$]. Last year my show was called - IKEA Hacking, the Cure for the Common Designer - for a reason. That reason was that as far I know, IKEA Hacking has no 'Tom Dixons or Philippe Starcks or Patricia Urquiolas' [no disrespect meant; they are all great designers in their own right, who contributed countless ideas to the field of design] - in my interview with 'We Demain' [French, glossy, good quality paper mag] I said that there are no 'IKEA Hacking Founders' - I certainly don't claim to 'invent IKEA Hacking' - this movement is very much driven by 'the People' - I define it as 'Accessibility, Affordability, Community', and any attempts to redefine or reshape it feel artificial and forced to me.


It has been my opinion for a while, and I get to confirm that occasionally by talking to eager young design school grads - there is just too many products made that even a larger number of young grads compete to design for. The Field of Design - educationally - it feels like 'the Computers' of the 90's. But let us say that they are successful and they pour all their acquired knowledge - we are talking all the whimsy, refinement, technology, great user experience - into a line of furniture / decor items that is made in such a basic fashion! As a maker - somebody who makes with their hands, somebody who handles materials and makes suitability decisions, someone who grades their own effort and labour - it was repulsive. Please do not put 'hand-made' or made by 'skilled craftsperson' on something that will make me doubt my own understanding of 'skilled labour' - I wonder what passes for skilled labour in places like Romania, or Lithuania, Latvia or Vietnam? Has the West lost all its 'manufacturing appeal'?*

The HAY collaboration would have been more valuable, I think, if HAY was allowed to expand their work [vs. limiting themselves to 'industrial primitive, see above] within the amazing IKEA ecosystem of fabrication and automation. I looked very closely at that DELAKTIG 'sofa' or whatever it is, by Tom Dixon's students - an interesting undertaking of understanding of human existence - and how well it appears to be made. I am just imagining the volume of thinking and debates that happened over this piece - and of course how I was not able to participate in that discussion [!!!] BUT I will be able to participate in it once it becomes available to the public. How much better, I think, the YPPERLIG collection would have been if HAY's ideas were realized in a more refined fashion, or maybe something that is true, quality 'hand-made', 'artisanal crafted', 'skilled labour'....


*NOT AT ALL - come hear my presentation on Jan 18 at the Assembly Hall to hear my views and opinions on 'manufacturing in the WEST' and what it means!


** which did not work out - sad face - BUT I did learn tons! - You mean there are thousands of individuals and families who could benefit from having affordable interior design solutions done quickly with very accessible budgets [much less than a RENO SHOW!!] with super quick timelines [like 2 weeks!] AND with the end result LOOKING LIKE A MILLION BUCK$?