Confessions of an IKEA Hacker - DELAKTIG, you had me at 'HELLO' 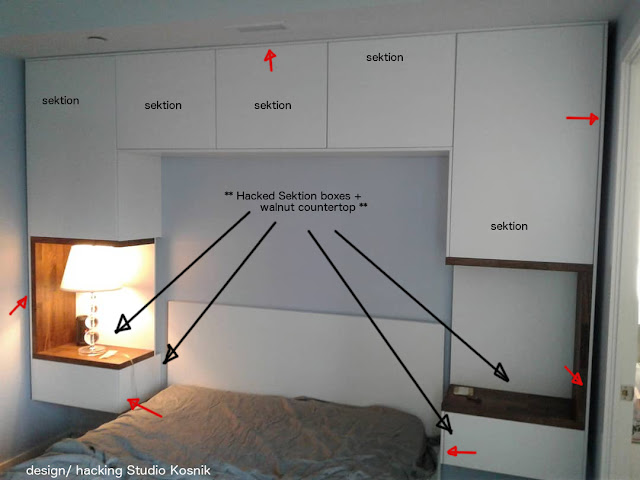 [picture shows Studio Kosnik designed IKEA Section hack - modern, geometric design that is based on the SEKTION box; Forbattra panels which complete the look, highlighted in RED; and Karlby countertop that was cut down to create 'wood voids' in the design]

Delaktig had at me at 'hello' - it was IKEA's answer to IKEA Hacking. The story, for me, first appeared in the IKEA Catalogue - 'get involved' was a call to action - and the word 'hacking' was mentioned as an inspiration [but just once! and in italics, as if it was an 'oddity'].  It was a collaborative effort is seems, Tom Dixon's students were involved in conceptualizing 'Delaktig' - which when you use the power of the machine - aka google - translates to 'involved' from Swedish. OK.....

But there was another reason to delaktig in the utopian vision - 'peak furnishings' - a term I first read about on one of those popular websites covering 'what's fresh and hot' in design, and coined, it seems, by IKEA themselves. Certainly a collaboration between a world famous designer and IKEA - world's leader in sustainable corporate philosophy - would be something to celebrate, but what?

Do you know what 'peak furnishings' is? Is it when you have too much stuff inside your dwelling, that you find it challenging to store it properly, let alone organize it. Is 'peak furnishings' - when you start throwing away personal things that are still useful but old, to make room for new, shinier things? I mean, that is the definition of wasteful society.

You know, it is kind if existentialist when a company says that it has designed a product, that will outlast it - the corporate entity. This is going to be the 'heirloom piece' for IKEA. Probably the first one, with more planned. DELAKTIG, made of aluminum - the cross section of the extrusion reveals channels which greatly add to its strength AND I saw a student proposal, because it is so modular, that it become 'infinity seating', and with its commercial potential, it could, say, replace Herman Miller* brands at the airports. This modular seating, according to IKEA's intentions, would be passed along, from generation to generation; a well cherished items gifted gracefully and received with excitement. A tall order for Ikea, I say.

I googled 'heirloom furniture' because I wanted to see what does the totality of, I think, Western human experience sees as 'heirloom' pieces. And then when looking at hundreds of images I tried to identify common elements amongst them. As you can imagine, the form was all over the place - organic shapes; rigid geometric shapes; weird shapes; some very decorative and some very austere. I am a furniture designer and a maker, I have great curiosity for the process of fabrication, and I can say with certain degree of confidence that I know how they make furniture. And, surely enough, a very strong indicator was the amount of 'hand labour' that each piece received - sometimes simplest forms require large amount of labour. People like hand-made things. Of course 'hand-made' has been spun in so many different ways to make the sale, that it is almost sickening sometimes. Our attraction to 'hand-made', in my opinion, has made it 'cheaper' in some ways, because labour in developing countries is so much less expensive, so every single manufacturer wants to move overseas. So the origin of the 'heirloom' piece is also important.**

Another thing is that I also make heirloom pieces. I take rough beams and surface and square them. I work with precious veneers and can do marquetry. I can execute fancy dovetail joints - even though I cannot make a living doing it. I can build challenging geometric forms that require complex interior structure that is often totally NOT seen and appreciated, but required nevertheless. I do metal inlays using 'red metals' - copper, brass, aluminum. AND I even love steel.

Of course I don't build a lot of them simply for the reason that you can get a lot more achieved via an IKEA Hack as opposed to one Kosnik heirloom - because they are of comparable costs.

And another silly observation - I am not an elitist. It is of greatest satisfaction when I can deliver designer, superior quality solutions to average ordinary people via IKEA 'peak furnishings' products - on a budget. Because, if you think about it - there can only really be one Krenov, one Wendel Castle - I am often torn between my desire to be unique, one of a kind, original - and providing real life working solutions. Maybe I think about it too much...

I once desinged a chair, and I called it 'the Lightest Chair ever'. It dates back to my college years and my obsession with 'extremes'. I designed and built a chair, which I thought would be revolutionary. It was made of 1/4" top grade Baltic Birch plywood [so a hardwood plywood; many, many layers of AA veneers] - and it weight a mere 2lbs! AND! The SEAT WAS NOT STRUCTURAL - so what happens when you design chairs, often times, the seat plays an integral part of the structure of the chair - without it it would break, collapse, seize... AND so my chair, you could have grabbed the seat, take it off and put on a....say... a cutting board and IT WOULD STILL WORK. I had that chair dynamically tested [torture, I cringed!] to 300lbs, and it was fine.

But it was NOT a successful chair. Do you know why? BECAUSE IT WAS TOO LIGHT! People were not comfortable using it! They feared that it would break, that it would not support their weight. My arguments - look at this, I am stress torturing it - did not work at all. As if a 'hive mind' was at work - the chair was NOT accepted.

That experience was an eye-opener. It made me realize, that as much as INNOVATION and novelty is a key component of design, there is great inertia that resists all things new in FURNITURE. YES, maybe that chair would have been adopted by some 'design radicals'; YES, maybe that chair would have been welcomed by individuals who easily afford the financial hit of breaking/destroying a 'high value design object' and having it replaced on a whim - but that is not general rule - BECAUSE RULE NO.1 is SALES. I am always reminded of de Stijl, a design movement that I am still obsessed with today, that was so rigorous, so unwilling to bend to 'real life' that it self-extinguished. Yes!, I was greatly attracted to the arbitrary rules and regulations, completely inapplicable to real life of average citizen - BUT do I want to live [continue making and designing] OR do I want to die [stubbornly pursue my rigid and rigorous vision]? Do I make obscure pieces and die like Kafka? Or will I exert greater influence on the Furniture Design field if I pursue IKEA Hacks?


*NO! Nothing can replace Herman Miller at the airports, as long as architects design them!
**there is a great furniture store in Toronto called, 'the modern furniture knock-off store', and all they sell off-shored replicas of Eames, Scandinavian Modern, etc.
Posted by Karol Kosnik