I met John, from Semihandmade and it CHANGED my life.

[edit: this post was written at 2 am in the morning, after I came back from a party] 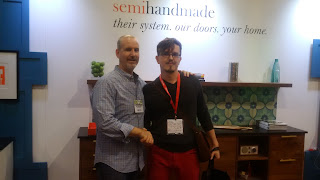 I think we both hate our pictures taken, but it had to be done. I met John McDonald of Semihandmade today - at the Toronto Interior Design show - and it changed my life - in a business sense. John McDonald is a great American businessman. This is a story of good design, innovation and great entrepreneurial spirit. I have been watching the Semihandmade story unfold over the last few years - IKEA has been hard on Semihandmade. 'IKEA can't pretend that it is cool when it comes down hard on people like us,' says John, 'there can be a real disconnect between what is happening at the street level and the corporate.' His marketing strategy - 'Instagram, we put it out and see how much we get back' - Semihandmade looks real good on Instagram - 'Ah,' I say, 'it's Insta-worthy'. It is clear that social media plays a large role the marketing of the product - but that is the way of the future, or now, actually.  In some way a large and loyal following gets to decide which product goes to the market. And the thing about IKEA kicking them out of the Interior Design Show? 'I think it was all a big misunderstanding,' says John. He used the words 'the Perfect Storm' - first, IKEA has the biggest booth and they are launching their brand spakin' new kitchen system, IKEA logo prominently featured on every piece of paper handed out, and then they saw him and freaked out. IKEA since apologized and paid all his expenses, and he is back this year with even better line-up - great designer collaborations. What strikes me about him is how straight forward and honest businessman he is - he just wants to do his thing. And IKEA not being here this year? 'They probably just don't care,' he says. Suddenly my strong suspicion that IKEA threw a hissy fit and not showed up evaporates - John is likely right. IKEA knows it's got the market cornered. It doesn't really need IDS anymore.

'Any advice for me?' I ask. 'Stay true to yourself,' says John. And we chat even more. I get an autograph and we snap a picture. 'Keep it rockin' in the free world, John!' I say as I walk away. I like America. 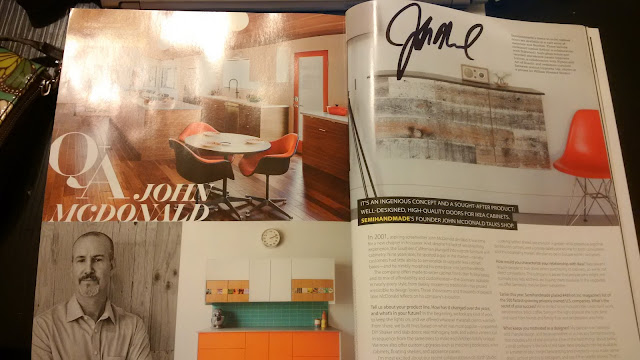 ps. He wanted to be a screenwriter before he did Semihandmade.
pps. He says that he's done his share of 'innovating' and 'sleeping on the couch', right now he just wants to run a successful business.
pps. I think John paved a way for a lot of us IKEA Hackers that make a living out of what we do,  and respect must be paid.

'Keep it rockin' in the free world!'
Posted by Karol Kosnik