The case for WILLIAM - a BILLY bookcase hack OR everybody needs boxes in their life.

This entry here is a part of the Toronto Design Festival 2021. 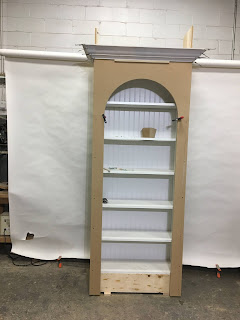 Picture shows Studio Kosnik WILLIAM bookcase prototype, a work-in-progress - a BILLY bookcase hack designed in the aesthetic called 'Accidental Wes Anderson'.  The BILLY bookcase had the back replaced with beadboard; side panels were added as well as 'face frames' and an oversized arch with a crown moulding tops the box. 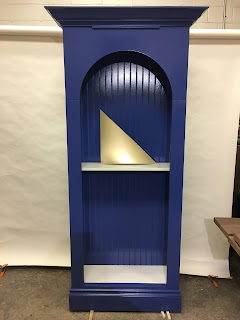 Chapter 1 - The need for storage

People have stuff. Sometimes lots and lots of it. Sometimes they have too much stuff and it becomes a problem.

Yes my friends that is most requested item on the menu at Studio Kosnik. No it is not fancy furniture design that people want [although I will often throw in some eccentric element into my design] but rather the superbly organized, well lit, beautifully functional Ikea hacks. I have found the perfect partner in IKEA - essentially they are in the business of boxes - well designed, well sourced.

In fact, Ikea's boxes are so popular that they often sell out of them. There exist shortages of their well priced boxes across many areas of United States, Canada - even European Union has its own issues [BREXIT!!]. Consumers complain of being sold a beautiful dream via the various IKEA planners, be it PAX, or SEKTION, or BESTA or BILLY or EKET..... just sooo many boxes - and then realizing that the item is out of stock and hasn't been re-stocked in ages. Or maybe they live outside of delivery area. Or maybe there isn't anyone in the area to install it - yes, there is a shortage of skilled labour.

Entry point pricing on a box that typically carries a better 'design value' - for example the design for the BILLY bookcase is resolved downright to the shelf pins! check them out! 10/10 - means that many of those boxes paired with the right designer [yes, that is another requirement...] - becomes an irresistible value proposition. How high are you holding your nose in relation to your wallet, huh?**

What is the box that every dwelling will need? Easy, it's the kitchen box and SEKTION - which is IKEA's second version of the kitchen box; a complete re-design of their previous AKURUM system [for which by the way exists an entire ecosystem of shops making replacement doors] - is an industry leader.

I love telling this story:

So one day we were installing some really fancy fancy millwork for Canada's most famous lawyer - personal residence. I was fresh out of design school and working for a high end millwork company. This place had it all - 'a meellion dollar floor', rift sawn wenge; 'a meellion dollar' kitchen, Italian Boffi; of course there was my 'meellion dollar zebra wood' closet and media unit. The house is absolutely stunning and well designed. Soon I discovered that there was another large kitchen in the basement - an exact look-alike, except it was from IKEA. This Boffi/IKEA thing did not dawn on me right away - both kitchens were nice white high gloss; both kitchens featured great functional hardware, AND at first glance they appeared identical. That's right ~they appeared identical~. Me, quote, unquote, a professional, couldn't spot the difference at first glance.

Much years has passed since that time - today, almost 15 years later, I've developed a more discerning eye and can spot 'designer' things easier, but this experience is deeply etched in my mind.

This pandemic has caused a dramatic shift to work from home for a specific demographic and now this demographic needs to be productive at home. There is a lot to be said for a comfortable task chair or a great, 'just-for-me' height desk or nifty filing storage system.  Guess what the backbone of such setups is? If you guessed boxes and slabs then you are right.

Browsing subreddits r/IKEA and r/IkeaHacks will give you an idea of the pent-up demand. Once a blessing - GLOBALIZATION - now a curse as all supply chains are upended and in shock. Geopolitical tensions are also rising and large corporations such as IKEA need to re-evaluate their long term stability of their supply chains. A good example that I always like to use is this: the more expensive and important a SEKTION door the likelier it is made in a stable western democracy. There are no doors made in China [there were!] and HAGGEBY which IKEA's plainest door is made in Ukraine which as far as my understanding goes is currently at war with Russia.